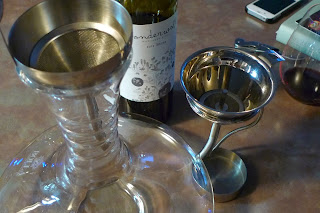 Its rare that I look at wine gimmicks and usually stay old school with a traditional waiter’s friend, decanter/funnel, and occasionally the inert gas preservation system for practicality,  or Port tongs or the sabre (for showmanship of course). The past couple of years I have  seen and used in various restaurants and clients home’s “venturi” aerators. In a nutshell, they work, some better than others. One of the biggest selling aerators on the market drives me batty with its room gurgling death sounds as you decant the wine so I shy away from its use and its knock-offs. Until last week  I had given these aerators a miss; then I discovered the Menu Blade Aerating Pourer.

This plastic and rubber aerator appealed to my design esthetic as a one piece unit that attached quickly  to all bottles and closures. Designed by UK brothers Adrian and Jeremy Wright of the design house DesignWright www.designwright.co.uk  it was a clear winner on form and function alone. According to the packaging the Blade out performed the "Vinturi" by 4% from 429% to 425% oxygen aeration according to Eurofin - who I only heard about after an internet search.

The Menu Blade was used in three blind tastings with wine trade friends and performed as I expected. Two young reds (2010 Bordeaux and 2011 Australian Shiraz) had softer tannins and enhanced secondonary fruit aromas and flavours after the blade use; although when used on a seven year old Spanish red (2006 Carinena DOC)  the tertiary flavours became dominate (not my favourite). Still old school by nature; I’ll use the blade when a client does not have a decanter, in some restaurant situations; but for sure with wine mates and somms  as it will adds an element of fun and discussion to our tasting events.

The Blade is well designed, affordable, and works well. It retails between $19.99 and  $22.99 as well as available on-line at Menu - Scandinavian Design

USE IT FOR: young reds and youthful old world Chardonnay (Burgundy)
NOT FOR: aged reds and whites, sweet wines, and natural/biodynamic reds with sediment